Since initially making its way to the United States in January of 2020, the COVID-19 pandemic has spread uncontrollably throughout the country. To date, the virus has infected over nine million Americans, killing upwards of 230 thousand. As the coronavirus surges and re-surges in different areas of the U.S., projections for cases and deaths have become increasingly grim.

While teams of scientists and medical experts around the world race to discover and develop therapeutic treatments and vaccines, they have deemed various preventive measures effective in combating the spread of COVID-19. Such measures include social distancing - maintaining six feet of distance between people who do not live in the same household - handwashing, and frequently cleaning high-touch surfaces. In the U.S., no measure is as controversial as the use of face coverings, and similar to other steps taken to curb the spread of the virus, states have taken a piecemeal approach to implementing face-covering policies. 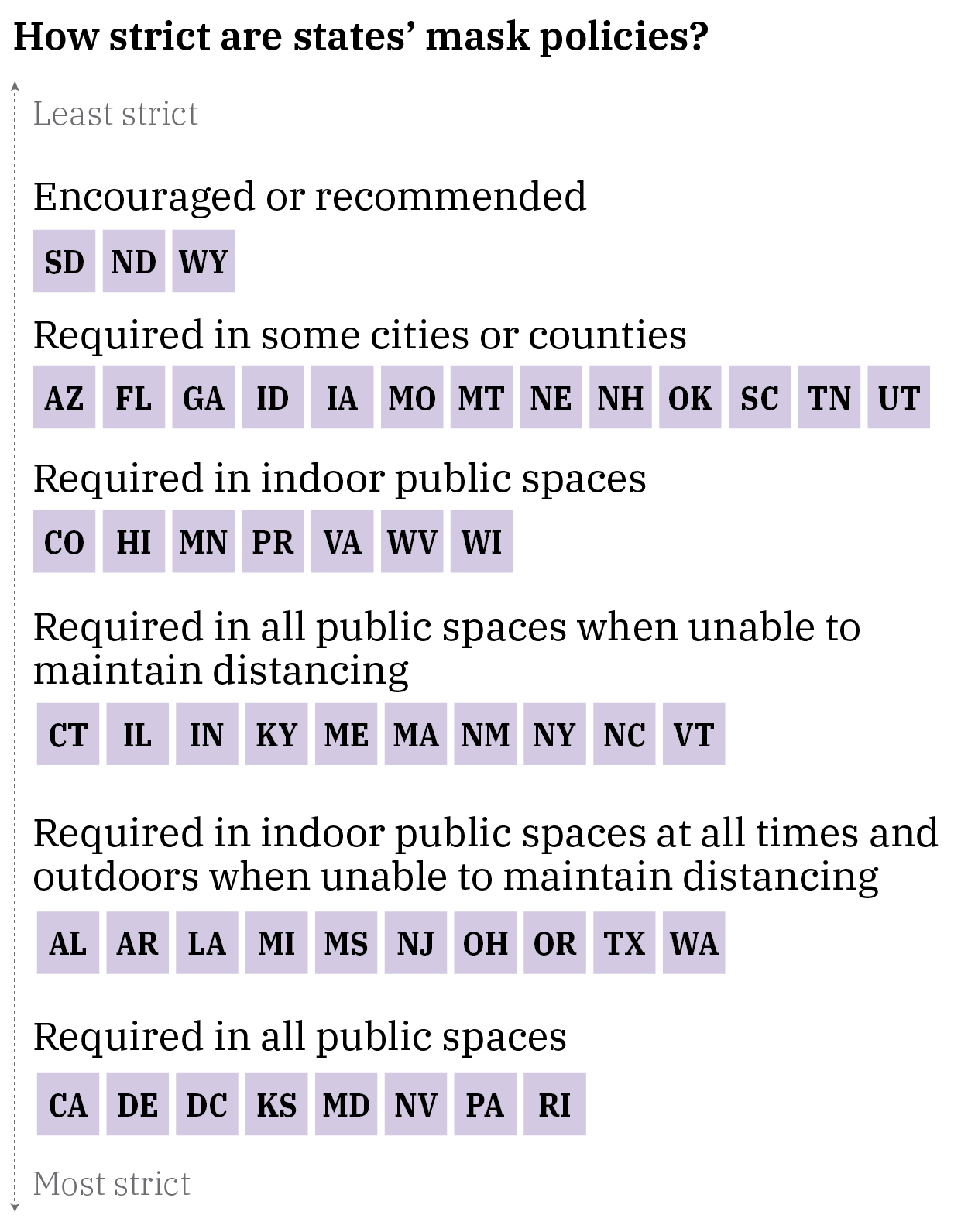 From the municipal level to the state level, across states that have not yet mandated the wearing of face coverings in public and in states that have, residents are "encouraged" or "recommended" to wear masks as governments cite the scientific evidence behind mask-wearing on their websites or launch "mask up" campaigns online and on social media. Federally, the CDC recommends that everyone at least two years old wear a mask when unable to maintain a distance of six feet from others not in their household.

States tend to act in tandem with other states in their region with respect to the strictness of their mask policies. For example, Wyoming and the Dakotas - all mountainous, relatively sparsely populated states in the country's northwest - have some of the most lenient face-covering policies in the U.S., effectively repudiating them outright; neighboring Idaho and Nebraska also lack statewide face-covering mandates. Conversely, in the country's Mid-Atlantic region, Delaware, Maryland, Washington, D.C., and Pennsylvania have some of the nation's strictest policies.

There also exists some variation within each level of strictness regarding face-covering policy. For example, some states have specified that their orders apply to people riding or waiting for public transit, and others have utilized subjective language in their policies, such as "crowded" and "public." 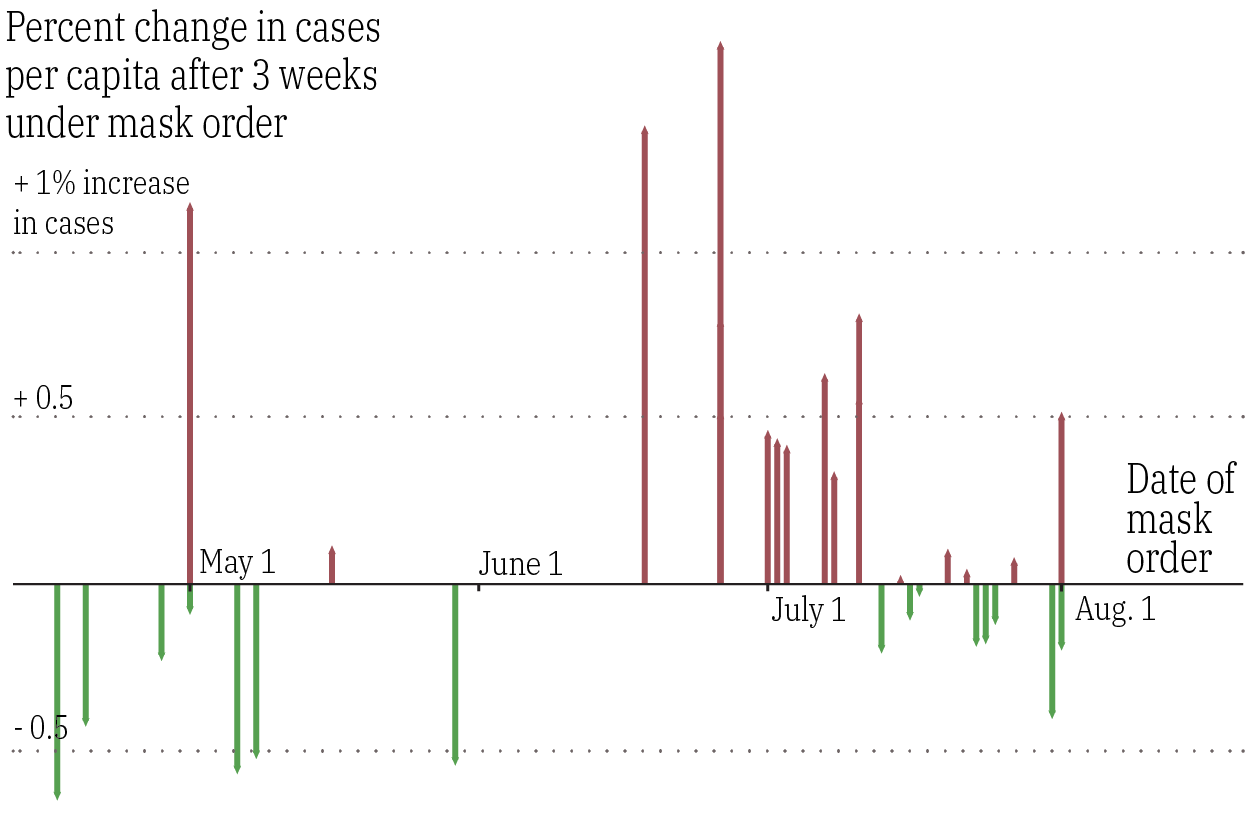 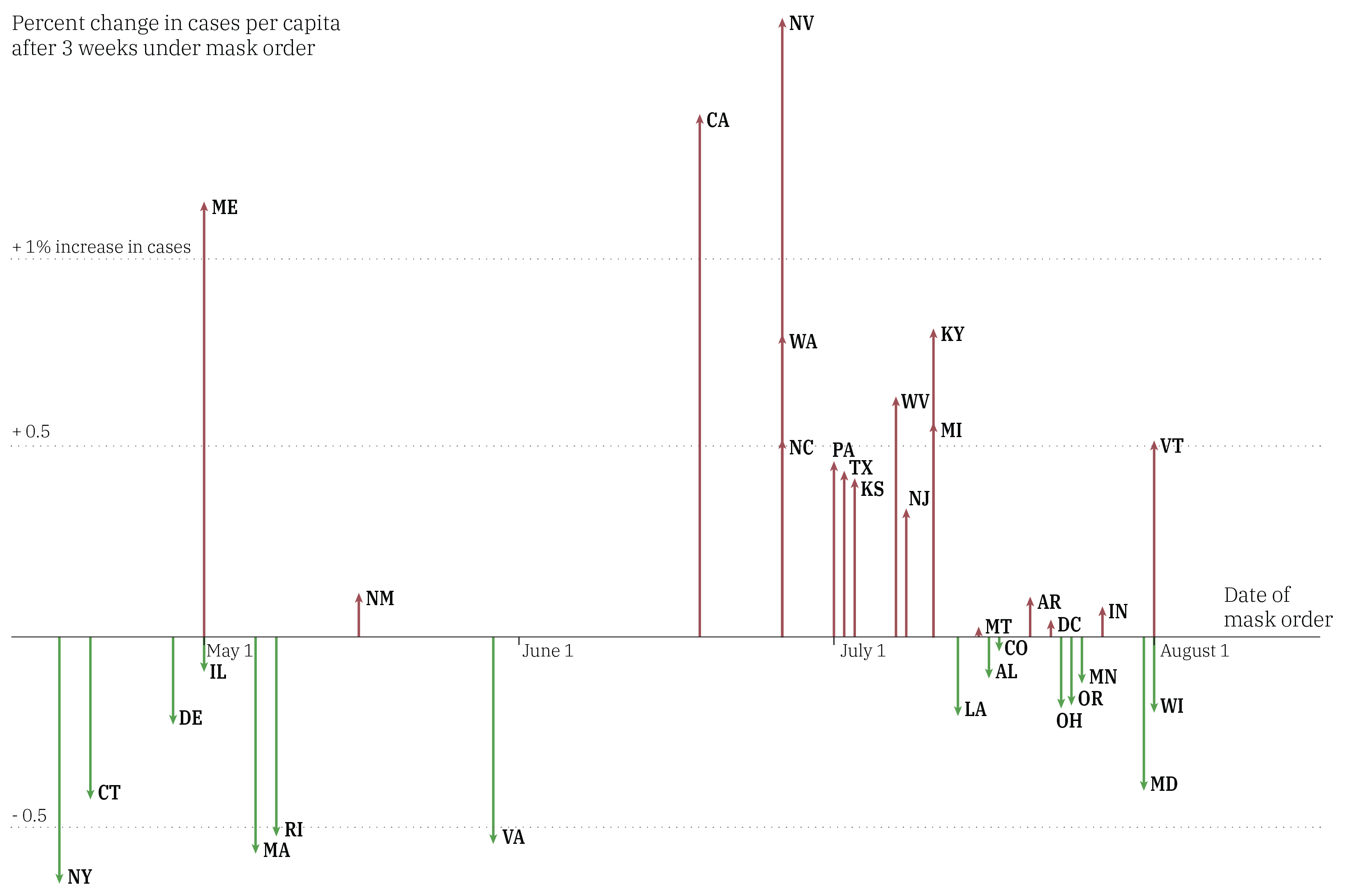 There is increasing evidence to support the use of facemasks to control the spread of COVID-19 by trapping viral particles so they can't escape an infected person's nose or mouth. However, as states continue to reopen and interstate travel increases as students return to college, mask-wearing alone is not enough to prevent transmission of COVID-19. Some states, including Mississippi and Wisconsin, went from lenient statewide recommendations to firmer mandates in August as spikes in COVID cases followed statewide reopenings.

As research develops surrounding the effectiveness of mask-wearing, though, masks have faced a new, non-scientific obstacle to their universal use: politicization. Mandatory mask-wearing has been criticized by some in the United States as an attack on individual freedoms. Many of the groups that advocated against state shutdowns have now shifted their focus to loosening mask policies in the name of personal liberties. On May 1 in Flint, Michigan, a Family Dollar security guard was fatally shot after he informed a customer that her daughter was required to wear a mask in the store. 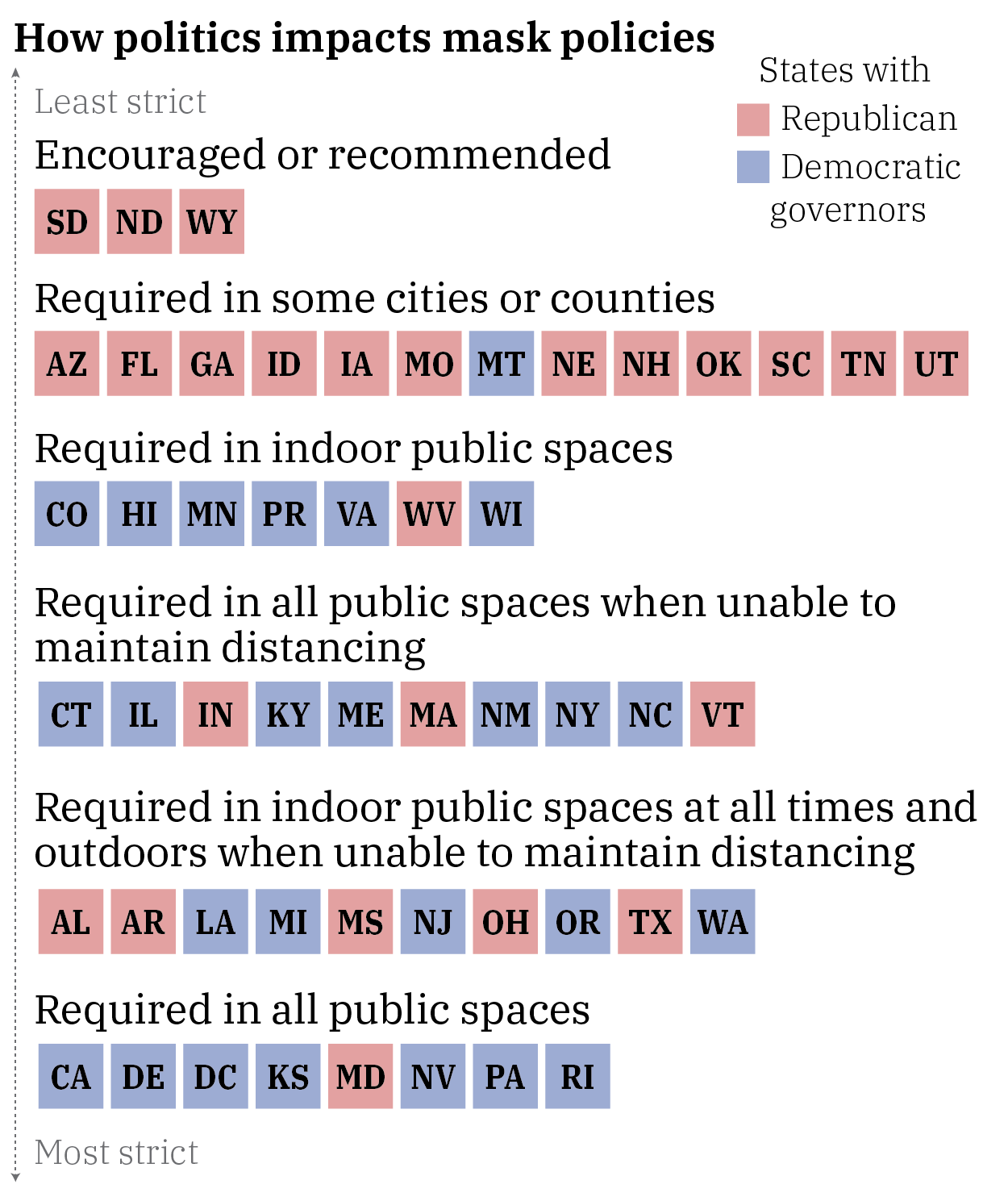 States with stricter face-covering policies tend to be governed by Democrats, whereas states with more lenient face-covering policies tend to be governed by Republicans. A June Pew Research Center study reported that among Democrat-leaning voters, 76 percent self-reported wearing masks in public, while just 53% of Republican-leaning voters reported the same. United States President Donald Trump has sent mixed messages on mask-wearing to the American public, calling their use "patriotic" while routinely appearing maskless in public and holding multiple campaign rallies among mostly maskless crowds.

As face-covering policies have become more common in the U.S., anti-mask protests have also cropped up across the country. A protest held on August 21 in St. George, Utah, went viral on TikTok and Twitter after a news report on the event captured demonstrators calling enforcement of face-covering policies "child abuse" and likened wearing masks to the murder of George Floyd by a Minneapolis police officer.

Some government officials in the United States have contracted the coronavirus, including Oklahoma Governor Kevin Stitt, who tested positive for the virus in mid-July. Still, Stitt remains steadfastly opposed to instating a statewide mask mandate, despite agreeing that mask-wearing has contributed to a decline in the spread of COVID-19 in certain parts of the state. In the early hours of Friday, October 2, U.S. President Donald Trump tweeted that he and his wife, Melania, had tested positive after top Trump aide Hope Hicks was diagnosed with the virus hours earlier. The news came after months of downplaying the severity of the pandemic and the importance of mask-wearing by the White House.