The Largest Migration Booms of the Past 30 Years

Just a few weeks ago, the government of Greece came under fire after it was reported that over 1,000 migrants, many of whom were fleeing the civil war in Syria, were abandoned at sea by Greek authorities. This development followed a threat by Recep Tayyip Erdogan, the president of neighboring Turkey, to allow hundreds of thousands of refugees to enter the European Union. As the migrant crisis in Europe continues on, even after the European Commission declared it over in 2019, its root causes, particularly warfare and poor economic conditions in the Middle East and Africa, continue to linger. While the levels of migration in Europe in the mid-2010s seemed unprecedented, migration events of this magnitude have occurred recently throughout the world. The causes of these previous "migration booms" can provide insight into which conditions may lead to similar events in the future.

Over the past 30 years, there have been 15 instances in which a country's migrant pool—the number of people from that country living in another country - more than doubled over a five-year interval (or four years, in the case of the 2015-19 interval). Here are those instances: 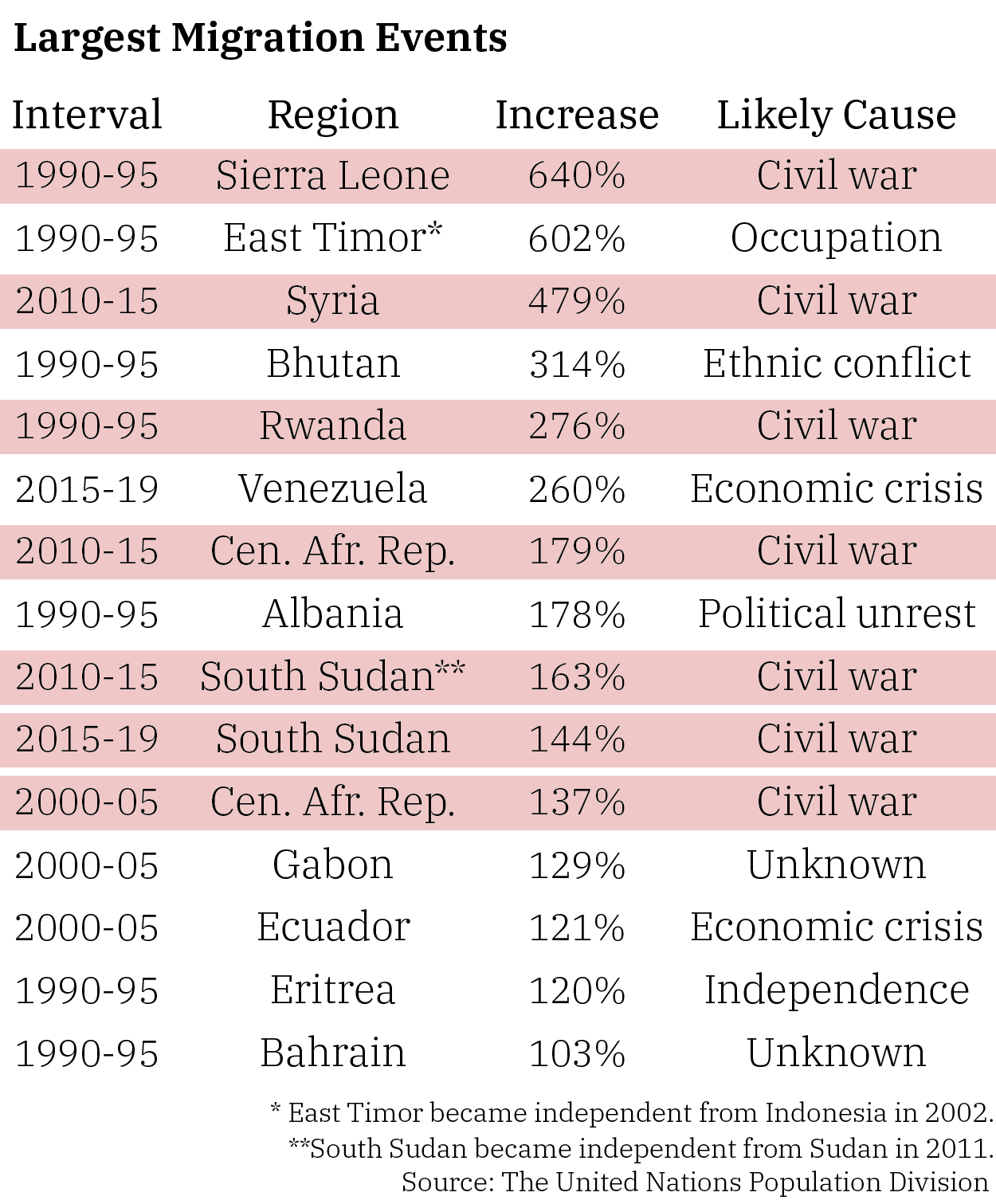 Civil wars, which often displace large numbers of people by creating unsafe living conditions, were the most common cause of these major migration events. Interestingly, all civil war-related migration events listed took place in Africa with the exception of Syria (2010-15). In fact, both instances of a country having not just one, but two major migration booms over the past three decades were related to central African civil wars - in South Sudan and the Central African Republic.

In addition, twelve of the fifteen major migration booms took place in countries that became sovereign nations in or after 1960. This appears to be linked to war, since new nations tend to have a greater propensity to fall into civil war (or are created via a struggle for independence). 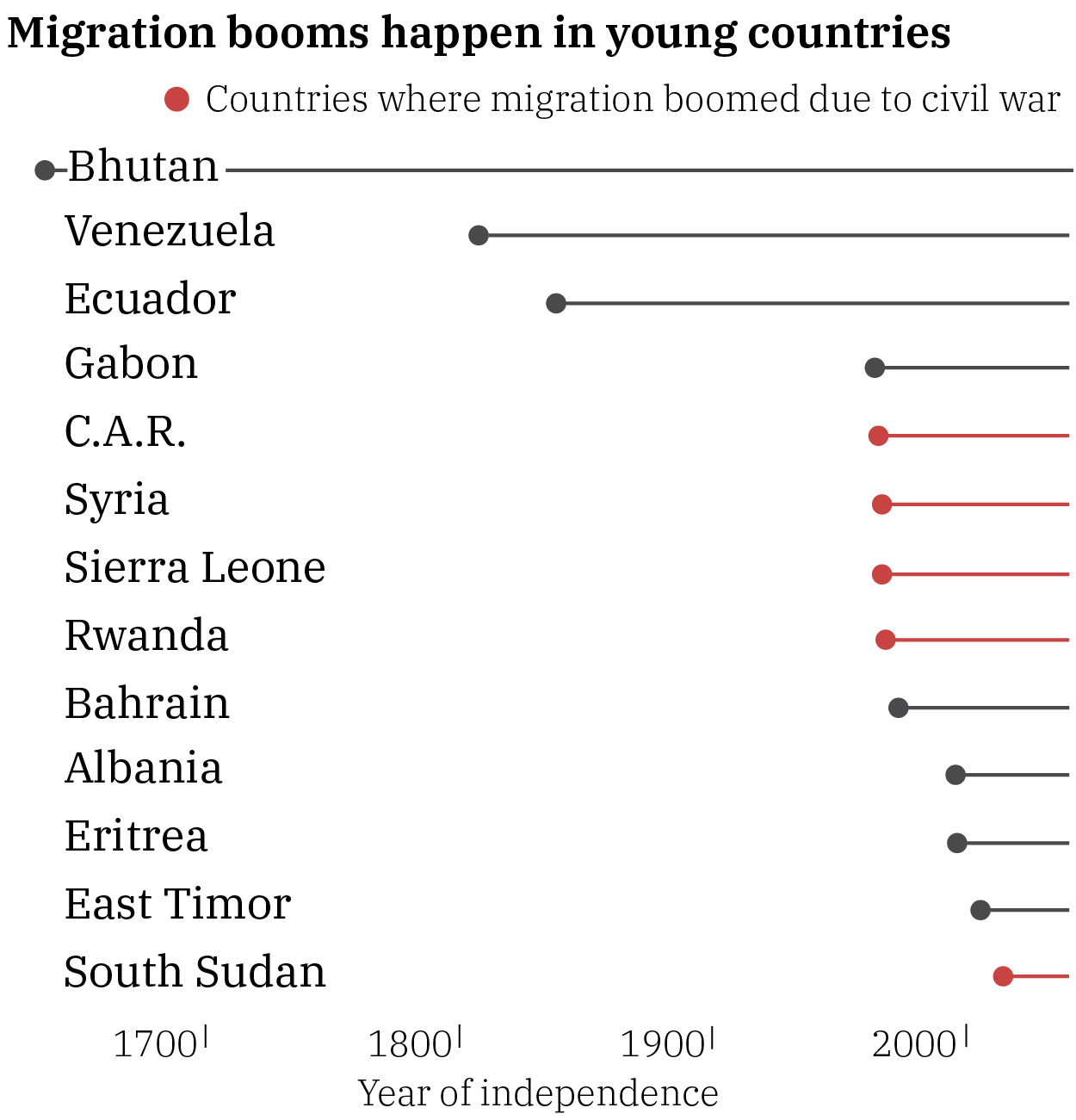 Another possible contributor to major migration booms is poor economic conditions - out of the 13 countries in which these events occurred, 10 are in the lower 50% of countries by GDP per capita, per the International Monetary Fund’s 2019 estimates. 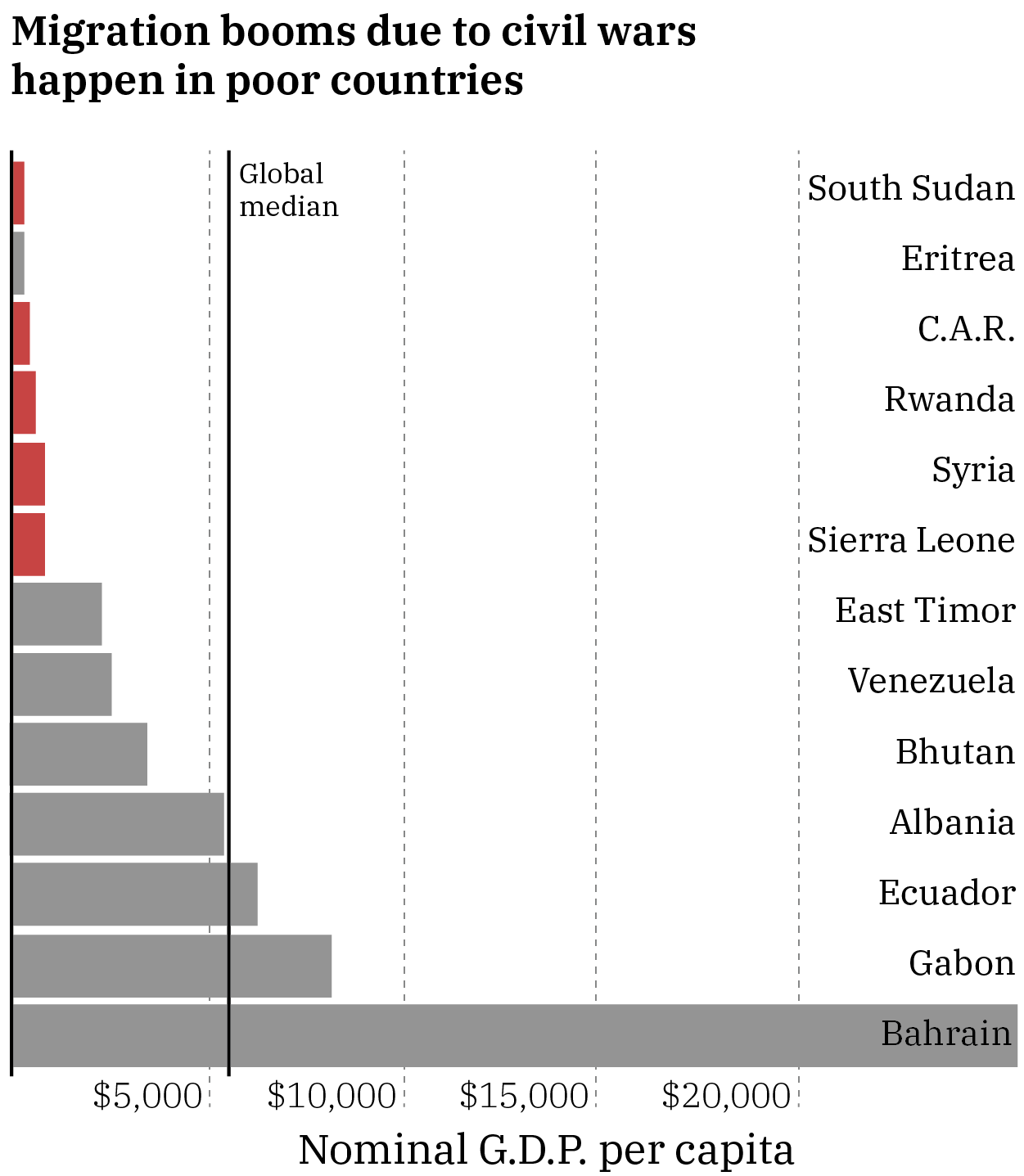 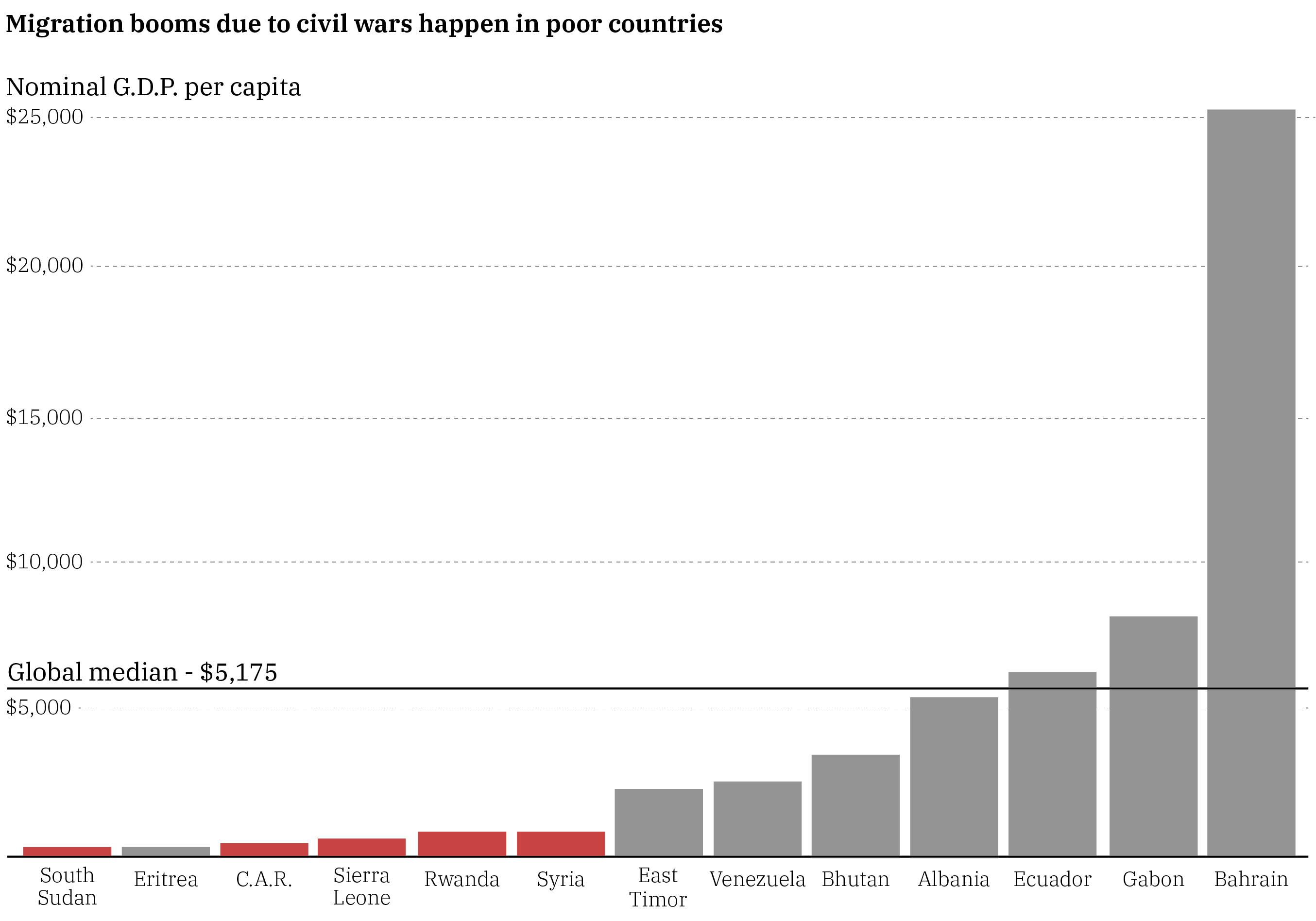 Although countries like Afghanistan and Syria had better-known conflicts during this period, the largest-ever migration boom took place in Sierra Leone. Sierra Leone's migrant pool exploded from 62,061 migrants in 1990 to over seven times that just five years later, in 1995. The civil war in Sierra Leone significantly impacted the surrounding countries; 250,000 Sierra Leoneans flooded into neighboring Guinea between 1990 and 1995. However, war-related migration was not merely limited to West Africa - the numbers of Sierra Leoneans in the United States and the United Kingdom, which supported the small nation against the Revolutionary United Front, nearly doubled during the time period. 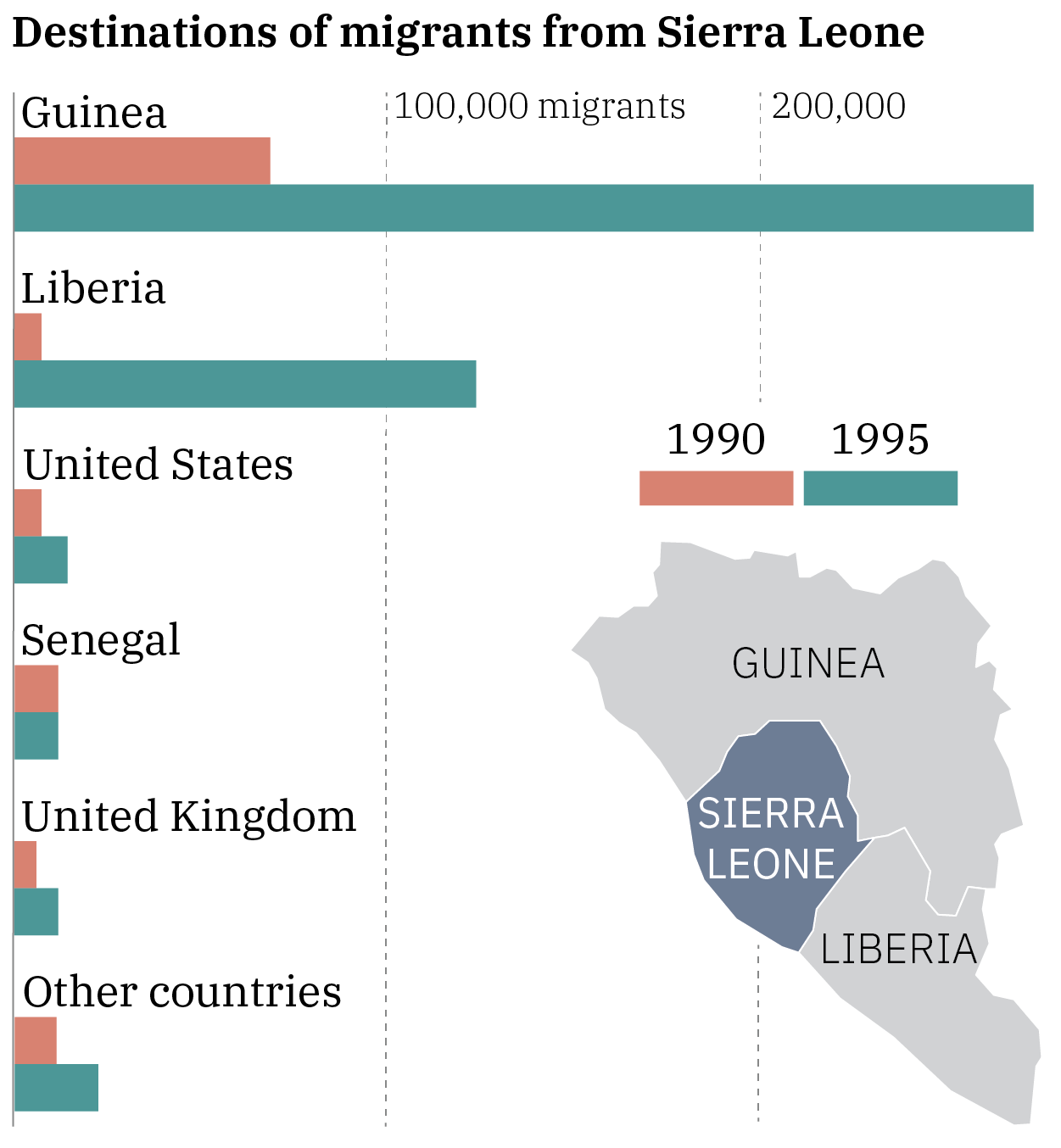 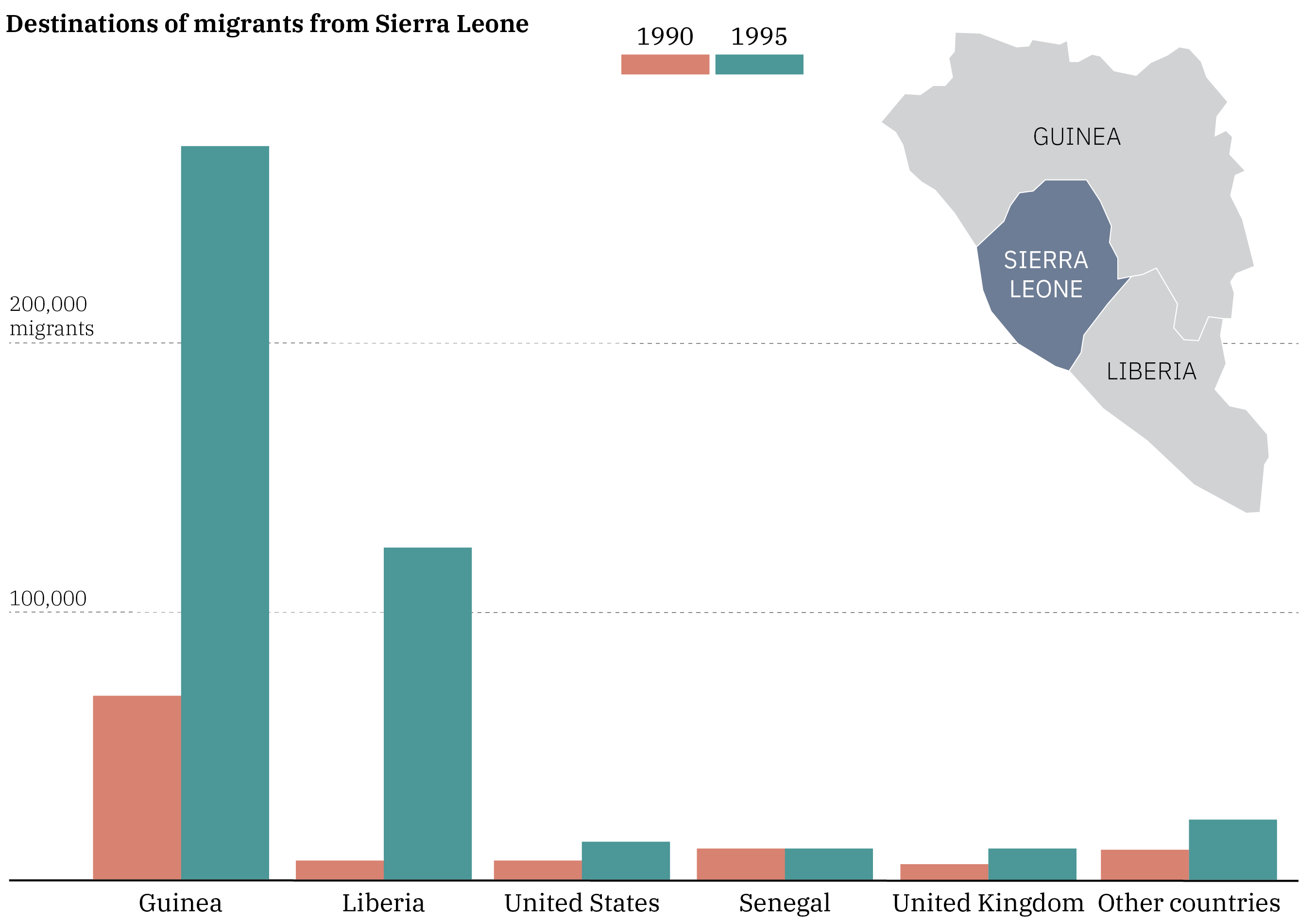 Meanwhile, perhaps the best-known migration event on this list is the one caused by the Syrian civil war, which, like the war in Sierra Leone, led to a flow of migrants into the surrounding region as well as the rest of the world. In addition to the 3.7 million Syrians in Turkey and 1.2 million in Lebanon, over a million Syrians were in Europe in 2019. Syrians in Europe are the fourth-largest entirely Asian group on the continent, only behind migrants from India, Uzbekistan, and China; in 2010, they were the 18th-largest such group. The number of Syrians abroad - over 8.2 million - is now nearly half the country’s population. 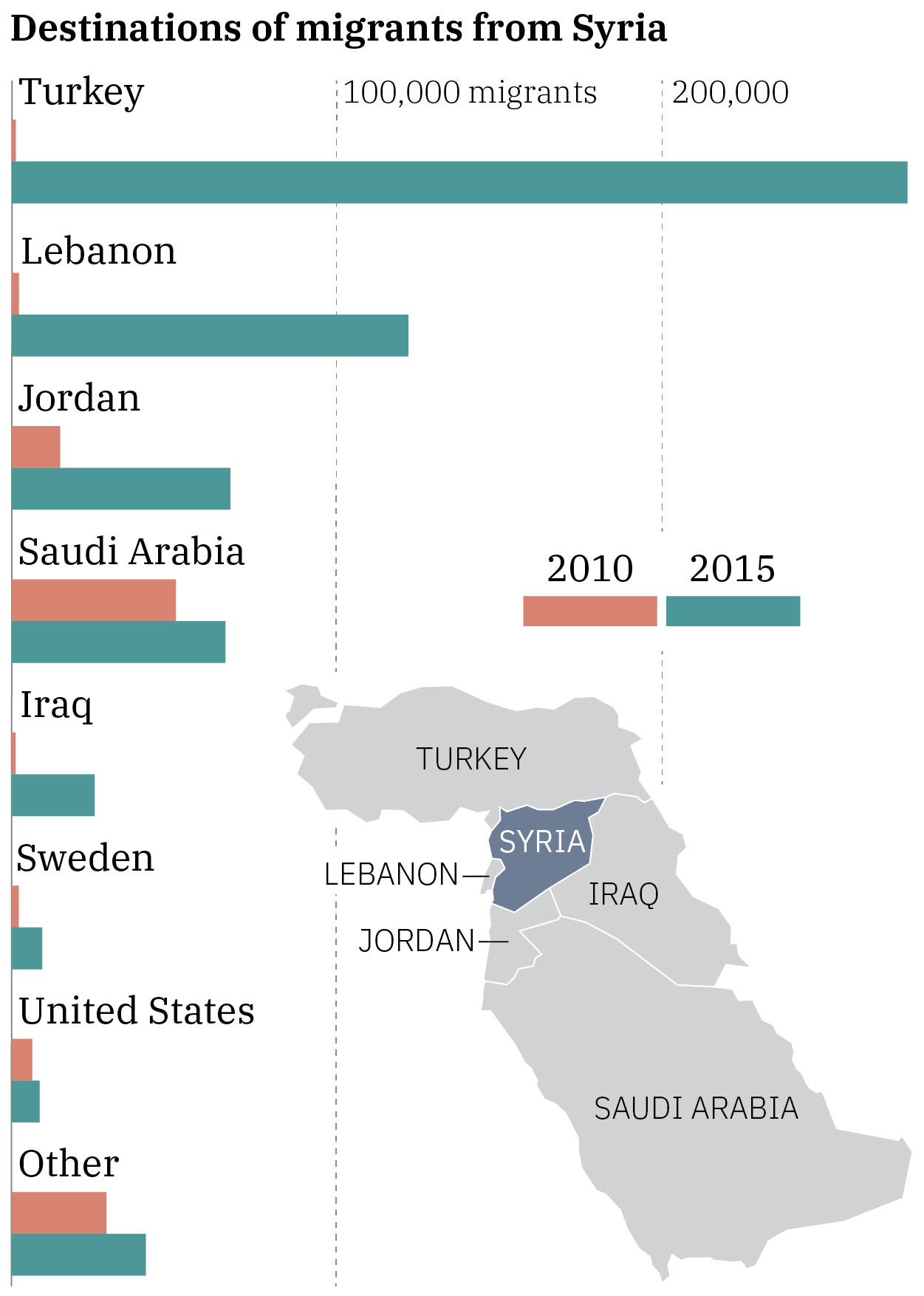 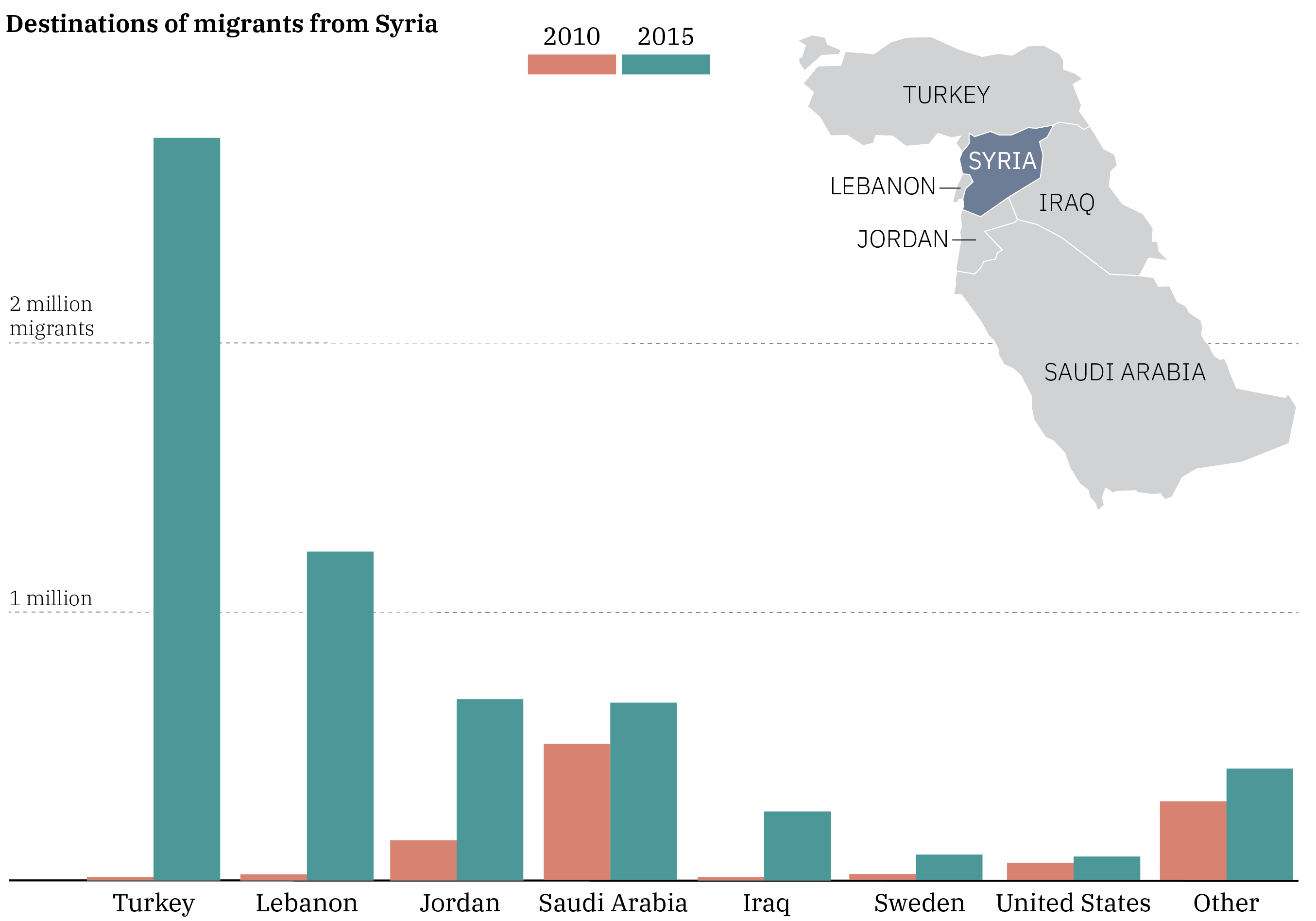 Another recent migration boom, although less prominent than the Syrian refugee crisis, has been sparked by a socioeconomic crisis that has plagued Venezuela since 2010. Despite the fact that Venezuela is the only country in the world whose migrant pool has increased by over 25% during every five-year period since 1990, nearly 40% of all Venezuelans abroad have left the country since 2015.

A million Venezuelans have crossed the border into Colombia since 2015; the influx of refugees from Venezuela into Colombia was described in a recent New York Times article as "the worst [refugee crisis] Latin America has ever experienced." Even countries thousands of miles away, such as Argentina, Chile, and Spain, have taken in over 45,000 Venezuelans since 2015. Considering Venezuela's continued economic predicament, it is likely to remain the country in the Western Hemisphere with the lowest net migration rate in the years to come.

Just how bad are the current economic conditions in Venezuela? Well, the GDP has fallen from its peak of $539 billion in 2013 to just $202 billion in 2019, lower than the GDP in 1991. In 2018, hyperinflation made the bolívar fuerte the world’s least-valued currency—one U.S. dollar was equivalent to over four million bolívares in August. The average Venezuelan has lost nearly 20 pounds in weight due to malnutrition, and so-called "death squads" have killed nearly 18,000. Coupled with rampant corruption and falling oil prices, it is no surprise that Venezuelan migration is at the level it is today. Perhaps, now that the entire world is dealing with the effects of the COVID-19 pandemic, Venezuela could set a precedent for other countries of unfavorable economic conditions, not civil wars, becoming the predominant cause of major migration booms.